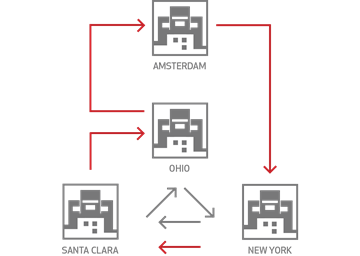 This discussion is a high-level architectural overview of Aerospike XDR.

For specific details on how to configure XDR, including sample parameters for the features discussed in this overview, see Configure Cross-Datacenter XDR.

Replication is defined per datacenter. You can also configure the granularity of the data to be shipped: 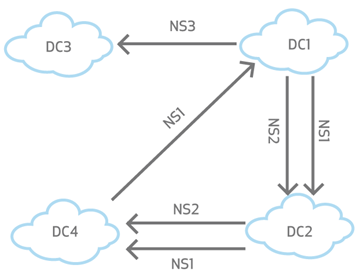 You can configure XDR to ship certain sets to a datacenter. The combination of namespace and set determines whether to ship a record. Use sets if not all data in a namespace in a local cluster needs to be replicated in other clusters.

You can configure XDR to ship only certain bins and ignore others. By default all bins are shipped. You can use bin-policy to decide which bins will get shipped.

In addition, you can configure XDR to ship record deletions. Such deletes can be either those from a client or those that result from expiration or eviction by the namespace supervisor (nsup).

By default, XDR does not compress shipment data. To save bandwidth, if necessary, you can enable compression.

General mechanism of XDR: comparison of LUT and LST​

A common use case for active-passive is to offload performance-intensive analysis of data from a main cluster to an analysis cluster.

Multi-Site Clustering and Cross-Datacenter Replication provide two distinct mechanisms for deploying Aerospike in an active-active configuration. More information of the tradeoffs involved in using either model can be found in the article Active-Active Capabilities in Aerospike Database 5.

In active-active mesh topology, clients can write to different clusters. When writes happen to one cluster, they are forwarded to the other. A typical use case for an active-active topology is when client writes to a record are strongly associated with one of the two clusters and the other cluster acts as a hot backup.

If the same record can be simultaneously written to two different clusters, an active-active topology is in general not suitable. Refer to "Bin convergence in mesh topology" for details.

An example for the active-active topology is a company with users spread across a wide geographical area, such as North America. Traffic could then be divided between the West and East Coast data-centers. While a West Coast user can write to the East Coast datacenter, it is unlikely that writes from this user will occur simultaneously in both datacenters.

Aerospike version 5.4 introduced the bin convergence feature which can help with write conflicts in mesh/active-active topologies. This feature makes sure that the data is eventually the same in all the DCs at the end of replication even if there are simultaneous updates to the same record in multiple DCs. To achieve this, extra information about each bin's last-update-time (LUT) is stored and shipped to the destination clusters. A bin with a higher timestamp (LUT) is allowed to overwrite a bin with lower timestamp (LUT). An XDR write operation succeeds when at least one bin update succeeds, and returns the same message for both full and partial successes.

If you are using a chain topology, be sure not to form a ring daisy chain. Make sure that the chain is linear: it ends at a single node and does not loop back to the start or any other link of the chain.

Aerospike also supports many hybrid combinations of the above topologies.

While the most common XDR deployment has local and remote clusters in different datacenters, sometimes the "remote" cluster might be in the same datacenter. Common reasons for this are:

XDR works for clusters of different size, operating system, storage media, and so on. The XDR failure handling capability allows the source cluster to change size dynamically. It also works when multiple-destination datacenters frequently go up and down.

XDR offers the same redundancy as a single Aerospike cluster. The master for any partition is responsible for replicating writes for that partition. When the master fails and a replica is promoted to master, the new master takes over where the failed master left off.

If the connection between the local and the remote cluster drops, each master node records the point in time when the link went down and shipping is suspended for the affected remote datacenter. When the link becomes available again, shipping resumes in two ways:

When XDR is configured with star topology, a cluster can simultaneously ship to multiple datacenters. If one or more datacenter link drops, XDR continues to ship to the remaining available datacenters.

XDR also seamlessly manages combination failures such as local node down with a remote link failure, link failure when XDR is shipping historical data, and so on.