This section discusses the components of the Aerospike data model and the relationships among them.

The Aerospike database does not require a traditional RDBMS schema. Rather, the data model is determined through your use of the system. For example, if you wanted to add a new data type to a record, you would write that data type into the record without having to first update any schema. 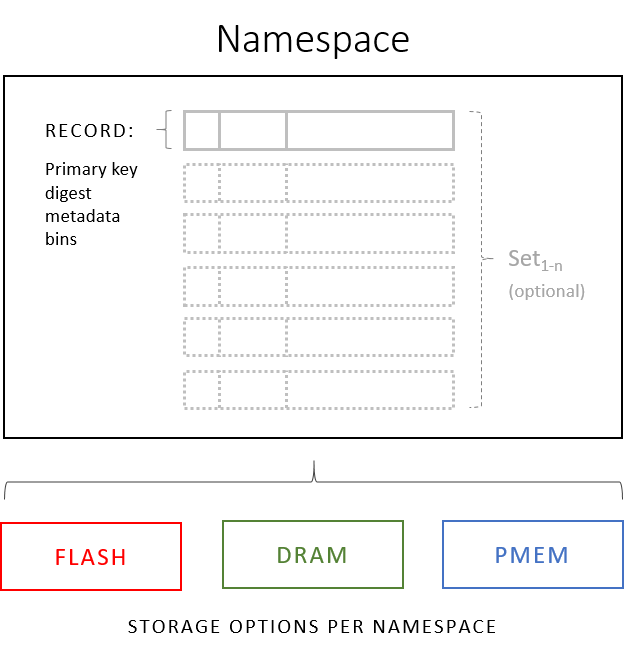 Varieties of physical storage are discussed in Hybrid Storage.

Namespaces are top-level data containers. The way you collect data in namespaces relates to how the data is stored and managed. A namespace contains records, indexes, and policies. Policies dictate namespace behavior, including:

A database can specify multiple namespaces, each with different policies to fit your application. You can consider namespaces physical containers that bind data to a storage device.

A database with multiple namespaces, ns1, ns2, and ns3, each with its own storage engine.

In namespaces, records can belong to an optional logical container called a set. Sets allow applications to logically group records in collections. Sets inherit the policies defined by their namespace. You can define additional policies or operations specific to the set. For example, secondary indexes can be specified for a particular set, or a scan operation can be done on a specific set. 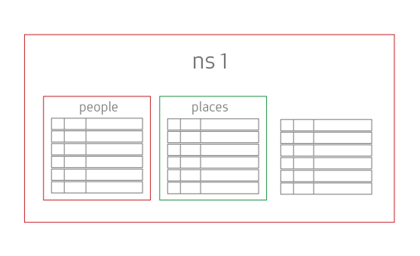 This shows two sets, people and places, that belong to the ns1 namespace, which also contains records not in a set.

A record is the basic unit of storage in the database. Records can belong to a namespace or to a set within the namespace. A single record is uniquely identified by a key. Records are composed of:

Using the client, the application performs operations on records stored in the database, by providing the key (or digest) of the record, and one or more operations (in an atomic transaction).

Each record contains the following metadata:

The record data is stored in bins. Bins consist of a name and a value. Bins do not specify the data type, rather the data type is defined by the value contained in the bin. This dynamic data typing provides flexibility in the data model. For example, a record can contain the bin id with the string value bob. The value of the bin can always change to a different string value, but it can also change to values of a different data type, such as integer.

There is no schema, so each record can have its own varied set of bins. You can add and remove bins at will.

Bin values can be any one of the native supported data type.

For details about upper bounds for bins, see Upper Sizing Bounds and Naming.